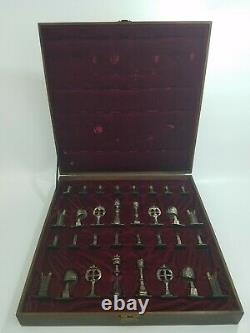 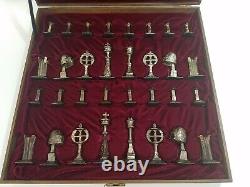 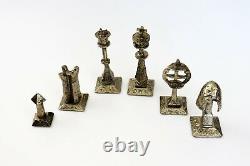 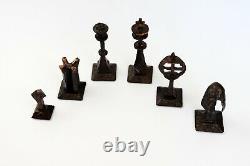 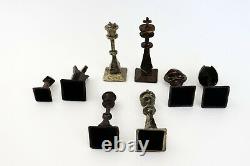 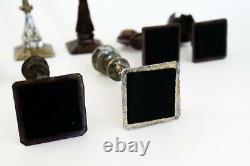 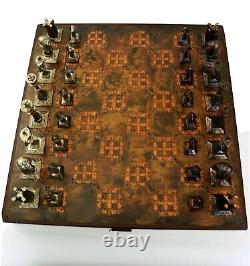 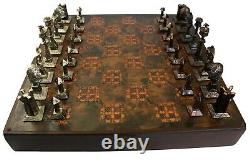 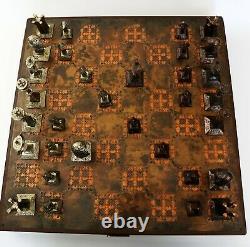 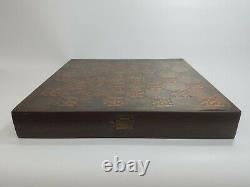 This chess set was designedby Charles Martel, and hand crafted by Richard Synek. It was originally created as a dedication to the élan of Charles Martel, prince of the Franks, who defeated the Moslems at Tours, 732 AD. The pieces were hand cast of solid metal, with bronze and nickel for the contrasting sides. They have a rustic surface, and nice heavy feel. Their sizes range from a nearly 2 inch tall pawn, to the 4 inch tall king.

They are nicely presented in a velvet lined woodcase, measuring 16½" square, and 2" thick. The top has a hammered copper playing board, embossed with detailed patterns.

It is in excellent condition overall. Any wear marks only enhance its ancient quality. The hinged top also has a push-button latch.

This is a rare chess set, with unique pieces, as beautifully crafted as any sculpture. Condition is Used but very well kept near mint. Latch works perfectly no tears in red felt lining and every piece is present with felt on bottom of each. Please see Pics and Message me any question. History Lesson of Charles Martel: Charles Martel, Latin Carolus Martellus, German Karl Martell, born c.

688-died October 22, 741, Quierzy-sur-Oise [France], mayor of the palace of Austrasia (the eastern part of the Frankish kingdom) from 715 to 741. He reunited and ruled the entire Frankish realm and defeated a sizable Muslim raiding party at Poitiersin 732. His by name, Martel, means the hammer. Early Life Charles was the illegitimate son of Pippin II of Herstal, the mayor of the palace of Austrasia.

By this period the Merovingian kings of the Frankish realm were rulers in name only. The burden of rule lay upon the mayors of the palace, who governed Austrasia, the eastern part of the Frankish kingdom, and Neustria, its western portion.

Neustria bitterly resented its conquest and annexation in 687 by Pippin, who, acting in the name of the king, had reorganized and reunified the Frankish realm. The assassination o fPippin's only surviving legitimate son in 714 was followed a few months later by the death of Pippin himself.

Buthe was young, strong, and determined, and an intense struggle for power at once broke out in the Frankish kingdom. Mayor Of The Palace Both Charles and Plectrude faced rebellion throughout the Frankish kingdom when Pippin's will was made known. The king, Chilperic II was in the power of Ragenfrid, mayor of the palace of Neustria, who joined forces with theFrisians in Holland in order to eliminate Charles.

Plectrude imprisoned Charlesand tried to govern in the name of her grandchildren, but Charles escaped, gathered an army, and defeated the Neustrians in battles at Amblève near Liège(716) and at Vincy near Cambrai (717). His success made resistance by Plectrude and the Austrasians useless, and they submitted. In 719 Charles defeated Ragenfrid at Soissons and forced him to retreat to Angers From that point, Charles alone governed the Franks as mayor. Assured of Austrasia, Charles now attacked Neustria itself, finally subduing it in 724.

This freed Charles to deal with hostile elements elsewhere. He attacked Aquitaine, whose ruler, Eudes (Odo), had been an ally of Ragenfrid, but Charles did not gain effective control of southern France until late in his reign. He also conducted long campaigns, some as late as the 730s, against the Frisians, Saxons, and Bavarians, whose brigandage endangered the eastern frontiers of his kingdom.

Even after these expeditions, the Saxons in particular continued toraid Charles's territory whenever the opportunity presented itself. Consolidation Of Power And The Battle Of Tours Charles relied heavily on armed freemen to serve as the foundation of his military, but the increasing pace of offensive operations compelled him to create for his army a strong cavalry element composed of landed professional fighting men.

The stirrup was not yet in use among Frankish horsemen, so Charles's equestrian force would not have resembled thetrue heavy shock cavalry of the later Middle Ages, but the expense of arms and armour was nevertheless significant. To finance this costly enterprise, he appropriated some of the ecclesiastical lands recently acquired and consolidated by various bishops, mostly in Burgundy. This action aroused no contemporary censure, and the tenure of the lands was later regularized under Charles's sons Pippin and Carloman. It was then decided that the warriors to whom the lands had been granted should hold them for life (precaria), with the church remaining the actual owner.

Again, no contemporary disapproval was shown at Charles's severity toward bishops, such as Rigobert of Reims, who were resentful or tardy in surrendering their holdings. Charles, in fact, was viewed favourably by the church and was noted for his patronage of monasteries.

It was to Charles that Pope Gregory II wrote in 722 to enlist support for Boniface's mission in the Rhineland. From that point onward, Charles consistently supported Boniface and also assisted the missionary efforts of Pirmin and Willibrord, apostles of the Alemanni and of the Frisians, respectively.

Having spent a large part of the 720s campaigning in the north and east, Charles spent much of the following decade combating a persistent threat on his southern frontier. Ever since their arrival in Spain from Africa in 711, Muslims had raided Frankish territory, threatening Gaul and on one occasion (725) reaching Burgundy and sacking Autun. Man al-Ghafiqi, the governor of Córdoba, marched into Bordeaux and defeated Eudes. The Muslims then proceeded north across Aquitaine to the city of Poitiers. Eudes appealed to Charles for assistance, and Charles managed to defeat a significant Muslim force at the Battle of Tours.

Although Tours is sometimes presented as a decisive check on Muslim expansion into Europe, it was, in reality, a single engagement in a decades-long conflict between the Franks and the armies of Muslim Spain. The victory did have the effect of burnishing Charles's reputation and authority, especially in Aquitaine, where he forced Eudes to swear allegiance to him. By 739 he had completely subdued the petty chieftains of Burgundy, and he continued to fend off Muslim advances into Gaul during the decade. Charles's health began to fail in the late 730s, and in 741 he retired to his palace at Quierzy-sur-Oise, where he died soon after. Before his death he divided the Merovingian kingdom between his two legitimate sons, PippinIII and Carloman.

Charles refrained from transferring the royal title to his own dynasty, however. The fiction of Merovingian rule would continue until Pippin set aside ChildericIII, the last Merovingian king, and had himself crowned king of the Franks in 751. The item "Charles Martel Richard Synek Hand Made Chess Set. Rare Near Mint" is in sale since Thursday, October 10, 2019.

This item is in the category "Toys & Hobbies\Games\Chess\Vintage Chess". The seller is "ragazzo20092009" and is located in Wimauma, Florida. This item can be shipped worldwide.