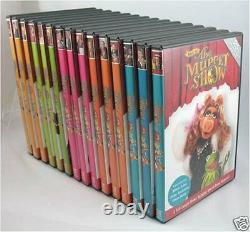 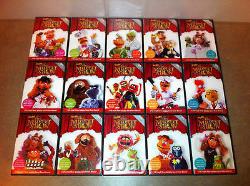 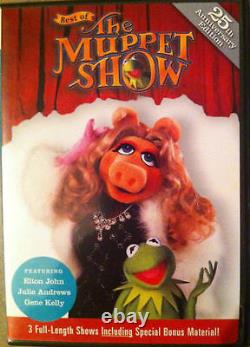 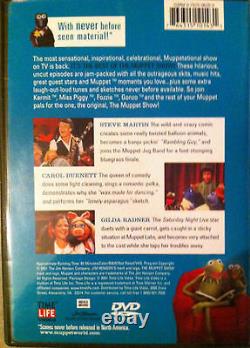 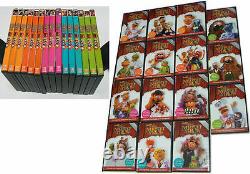 This would make a great gift! More Fun Than a Barrel of Monkeys - - For Children and Adults Alike - with lots of interesting & memorable celebrity personalities.

Best of The Muppet Show 25th Anniversary Edition. 15 DVD Collector Set Extremely Rare - Out of Print. The most sensational, inspirational, celebrational, Muppetational show on TV is back. IT'S THE BEST OF THE MUPPET SHOW! These hilarious, uncut episodes are jam-packed with all the outrageous skits, music hits, great stars and Muppet moments you love... Plus some extra laugh-out-loud tunes and sketches never before available. So join Kermit, Miss Piggy, Fozzie, Gonzo and the rest of your Muppet pals for the one, the original, The Muppet Show! Best of the Muppet Show was a line of videos and DVDs available through Time-Life Video. Time-Life originally released 6 videos, and then 9 more videos were released. The first ten were soon released on DVD, and the remaining 5 videos were released on DVD in 2002. H owever, the season 1 opening sequence was replaced on the season 1 episodes with the syndication reworked "season 2" opening.

Each episode included a brief introduction by Brian Henson , and each disc included bonus interstitials and an original concept drawing. On the main menu, there was a picture of Animal which could be highlighted, leading to a hidden feature: a fact about the show that usually related to one of the episodes included. After the end credits, the first two episodes would close with a wide shot of the orchestra from the first season's closing sequence, followed by a shot of Zoot from the 1980s. The third episode would just end with The Jim Henson Entertainment Company Logo. In honor of the 25th anniversary of The Muppet Show in 2002 , Columbia began re-releasing the series in stores.

At that time Time-Life had only 10 volumes available on DVD; they released the remaining 5 a short time later. Columbia initially announced that they would reissue the entire Time-Life series and add an additional 5 volumes, for a total of 20, but they had only released volumes 1-5 and 7-8 before the sale of the Muppets to the Walt Disney Company in 2004 terminated their distribution contract. Here are just a few performance highlights of what you will find on each DVD! (Floyd & Kermit) Movie Mania. Yoda Screen Tests Angus McGonagle concept drawing. (Bunsen & Beaker) Movie Mania. Screen Tests Statler & Waldorf concept drawing. (Waldorf & Statler) Movie Mania. Fozzie (da Bear) Movie Mania. Screen Tests Beaker concept drawing. Bob Hope's horse concept drawing. Cat on a Hot Tin Roof. Episode 322: Roy Rogers & Dale Evans. (Beaker & Bunsen) Movie Mania. The Good, the Bad and the Ugly. Just send a message for a prompt response! The item "Best of the Muppet Show 25TH Anniversary VERY RARE 15 DVD Complete Set NICE" is in sale since Sunday, December 27, 2020.

This item is in the category "DVDs & Movies\DVDs & Blu-ray Discs". The seller is "wealth-enhancement-resources" and is located in Minneapolis, Minnesota. This item can be shipped worldwide.