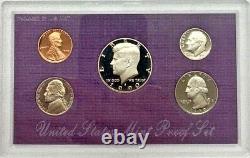 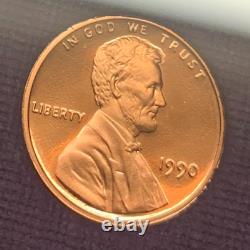 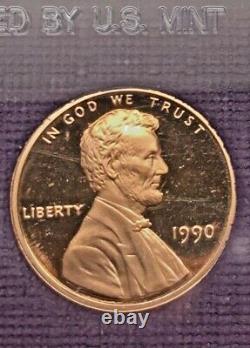 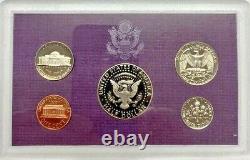 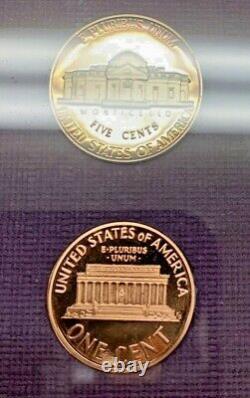 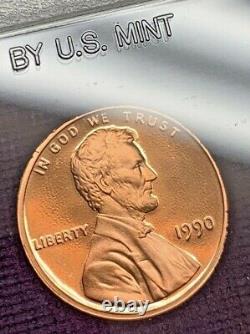 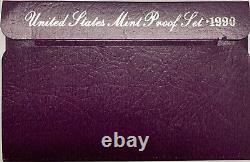 This is a 1990 "No S" Lincoln Memorial Proof Set in its Original U. This is an EXTREMELY RARE Variety type coin that is highly sought after.

Many of these coins have been broken out of its original packaging and sent for grading. According to PCGS, this is #9 of the TOP 100 Legendary and Most Sought-After Modern Coins. Attached below is an account from their website. Jaime Hernandez: For modern coins issued from 1965 to date, the Proof 1990 No S Lincoln cent is considered a beast, to say the least.

Fewer than 200 examples exist. It is from an extremely dynamic and popular series.

It is the only proof coin from 1909 to date in the entire Lincoln cent series that is missing the extremely significant mint mark. The coin exists against all odds. Moreover, the missing mint mark is obvious, even with the naked eye. Mint abandoned the practice of punching mint marks into working coin dies and instead, it began punching the mint mark directly onto the working hubs. However, the 1990 No S Proof Lincoln cent was inadvertently struck by a mint state die that had been processed as a proof die.

Therefore, in the early 1990s most collectors and dealers had the notion that thousands of 1990 No S Proof Lincoln cents existed. However, time contradicted those expectations, as less than 200 coins have surfaced.

For approximately 20 years, the approximate figure of fewer than 200 coins extant has remained somewhat stable. For years, there have been no reports of the discovery of additional 1990 No S Proof Lincoln cents. The majority of 1990 Proof and Prestige sets have been inspected. Dealers, collectors and cherry pickers of both modern and classic coins are well aware of this variety, because it commands thousands of dollars even in the lowest grades. This coin is rarely encountered in any major dealer's inventory or even at major auctions, where only a few examples make an appearance each year. The 1990 No S Proof Lincoln cent is among several other proof No S mint mark coins. These include the 1976 No S Eisenhower Dollar, the 1968, 1970, 1975 and 1983 No S dimes, and the 1971 No S nickel. NOTE: The Proof Set pictured is the actual one you will receive. We strive to provide the most accurate and best representation of our products while attempting to showcase the coin's highlights.

Please keep in mind that the item has been photographed at different angles under the same FLUORESCENT light fixture. The item may appear DARKER/LIGHTER depending on the ANGLES and LIGHTING it is VIEWED UNDER.

If you would like more pictures of the item, please do not hesitate to ask. We understand that this is a very unique item and we are more than willing to provide as much support as possible! The item "1990 NO S Lincoln Penny Proof Set OGP US Mint VERY RARE" is in sale since Wednesday, December 11, 2019.

This item is in the category "Coins & Paper Money\Coins\ US\Proof Sets". The seller is "lcgwholesale" and is located in Newport Beach, California. This item can be shipped worldwide.